Letting a baby play on an iPad might lead to speech delays, study says 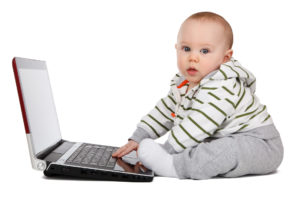 (CNN) Anyone raising a child today has likely fretted about screen time and wondered about the impact of devices on our kids. Does the technology affect their brains Does it limit their social development Could it harm them emotionally Could it delay when they start talking

I had never thought about that last question until a new study, released Thursday and being presented at the 2017 Pediatric Academic Societies Meeting, revealed some striking findings.

The study found that the more time children between the ages of six months and two years spent using handheld screens such as smartphones, tablets, and electronic games, the more likely they were to experience speech delays.

“I believe it’s the first study to examine mobile media devices and communication delay in children,” said Dr. Catherine Birken, the study’s senior investigator and a pediatrician and scientist at the Hospital for Sick Children in Toronto, Ontario. “It’s the first time that we’ve sort of shone a light on this potential issue, but I think the results need to be tempered (because) it’s really the first look.”

In the study, which involved nearly 900 children, parents reported the amount of time their children spent using screens in minutes per day at age 18 months. Researchers then used an infant toddler checklist, a validated screening tool, to assess the children’s language development also at 18 months. They looked at a range of things, including whether the child uses sounds or words to get attention or help and puts words together, and how many words the child uses.

Twenty percent of the children spent an average of 28 minutes a day using screens, the study found. Every 30-minute increase in daily screen time was linked to a 49% increased risk of what the researchers call expressive speech delay, which is using sounds and words. The study did not find any link between the use of a handheld device and other areas of communication, such as gestures, body language and, social interaction.

Birken, who is also an associate professor of pediatrics at the University of Toronto, stressed that while her study shows there appears to be a relationship between handheld device use and communication delays in young children, much more research is needed to determine if the device use is actually causing the speech delay.

Further research also needs to look into what content the young children are reviewing and whether they are using devices with a parent and/or caregiver present, she said.

“I think in order to actually develop the evidence to inform parents and clinicians about what to recommend, we need more definitive research,” Birken said. “You need trials. You need good evidence, at least longitudinal studies, but this, at least, this finding is identifying an association and it does support the current recommendation” from the American Academy of Pediatrics.

That group recommends no screens at all, other than video-chatting with family, for children younger than 18 months. The noise and activity of a screen can be distracting for a small children and can cause a disconnect between them and their parents, pediatricians have said.

For kids between the ages of 18 to 24 months, the American Academy of Pediatrics moved away last year from recommending a total screen ban for this age group. Instead, it recommends parents choose high-quality programming and watch it with their children to help them understand what exactly they are seeing.

Nearly 40% of children under age 2 have used a mobile device, an increase from just 10% in 2011, according to a 2013 study by Common Sense Media, a nonprofit organization that is focused on helping children, parents and educators navigate the world of media and technology. Those numbers are likely to be even higher today as smartphones have only grown in popularity.

“This is an important study in highlighting some of the potential risks associated with media use, and specifically handheld mobile devices,” said Michael Robb, research director for Common Sense Media. “What’s driving the effect is very important. The negative effects may be due to screen time replacing parent-child interaction (playing, reading, talking, singing, etc.) which are critical for healthy development,” said Robb via email.

Michelle MacRoy-Higgins and Carlyn Kolker are co-authors of the just-released “Time to Talk: What You Need to Know About Your Child’s Speech and Language Development,” which explores how speech develops in babies and young children.

MacRoy-Higgins, who has worked with hundreds of infants, toddlers, and young children as a speech-language therapist, said she was not at all surprised by the findings.

“We do know that young kids learn language best through interaction and engagement with other people, and we also know that children who hear less language in their homes have lower vocabularies.”

It may be the case that the more young children are engaged in screen time, then the less time they have to engage with caretakers, parents, and siblings, said MacRoy-Higgins, who is also an associate professor in the department of speech-language pathology and audiology at Hunter College.

The first two years are incredibly important for children and their early foundation of language is important for academic success, she said. “Delays can be associated with difficulties learning to read and to write in elementary school so these early years, these first two years, the language influence that kids get is really very, very important and we want our kids to stay on track with their language development because if they’re not, they’re really at risk for having some difficulties.”

When my first daughter was born in 2006, there was no such thing as an iPhone or an iPad. But today, handheld devices are ubiquitous, which is part of the reason why there is more attention and perhaps concern about the impact they might have on kids, especially babies.

“They are everywhere and we can’t ignore that fact,” said Kolker, a former Bloomberg News, and Reuters reporter, who started working on “Time to Talk” with MacRoy-Higgins almost five years ago. “We’re not all going to throw our phones away.”

Devices are a reality today, but parents need to be informed, she said.

“I think what this study shows is how much we really need to delve into what affects they’re having on children, and how a parent, while we may have them and while they may be there, we need to know how exactly we can regulate them,” Kolker said.

The best advice for parents, the co-authors say, is to interact with their children. The best way to teach them language is by interacting with them, talking with them, playing with them, using different vocabulary, pointing things out to them, and telling them stories.

“They’re free and they’re easy to do,” said MacRoy-Higgins, a mother of two who said she wanted to write a book because she is constantly approached by fellow parents with questions about their children’s language development. “Sometimes parents want to know ‘What type of toy should I buy ‘ … ‘What types of things can I buy to help my child learn ‘ and you don’t have to spend a lot of money, just time and engagement is really the easiest thing that you can do.”

But most parents today, even those who are aware of the research, may find it useful to let their baby be preoccupied with a handheld device from time to time and that’s OK, said Kolker, who is also a mom of two.

“Every parent is going to need a device at some moment, a screen or a device, a tablet with their child at some point,” Kolker said. “It’s just going to happen and you can do that without some level of guilt, but I think you need to know that those are effective tools to help yourself perhaps in a down moment but they aren’t tools that are really going to help your child.”

A Time to Talk

A Time to Talk