By Craig SelingerMay 8, 2015Blog
No Comments 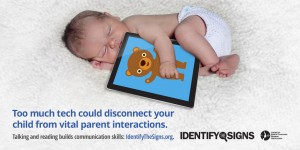 (May 8, 2015 Rockville, MD) A new survey of U.S. parents commissioned by American Speech-Language-Hearing Association (ASHA) finds significant percentages reporting technology use by very young children and more than half of the parents surveyed have concerns about the potential negative impact of technology use on the ability of the young to communicate.

Conducted this past March, the survey polled 1,000 parents of children ages 0 8. Its release today occurs during Better Hearing & Speech Month, a national observance that raises awareness of speech, language, and hearing disorders and spotlights the importance of communication health.

Sixty-eight percent of surveyed parents 2-year-olds use tablets. Meanwhile, 59% use smartphones, and 44% use video game consoles.

Such results raise questions about the course of the development of the very young s capacities to communicate, according to Judith L. Page, PhD, CCC-SLP, 2015 ASHA president.

She adds: Indeed, despite advances in technology, it remains critical that children have sufficient opportunities to develop their vocabulary and communication skills by listening, talking, reading, and interacting with their parents and others, for which there is no substitute.

–55% have some degree of concern that misuse of technology may be harming their children’s hearing; with respect to speech and language skills, the figure is 52%.

–Parents recognize the potential hazard of personal audio devices to their children's hearing; 72% agree that loud noise from technology may lead to hearing loss in their children.

Although it is encouraging that a vast majority of surveyed parents report putting limits on their children's technology use, the efficacy of those steps is questionable given other survey results.

For example, 24% of 2-year olds use technology at the dinner table a prime time for the kind of interaction that fosters strong communication development. By age 8, that percentage nearly doubles (45%).

Also, by age 6, 44% of kids would rather play a game on a technology device than read a book or be read to. By age 8, a majority would prefer that technology is present when spending time with a family member or friend.

In addition, more than half of parents surveyed say they use technology to keep kids ages 0 3 entertained; nearly 50% of parents of children age 8 report they often rely on technology to prevent behavior problems and tantrums.

ASHA President Page encourages parents to set and enforce meaningful and healthy limits early and understand that usage rules need to be adapted as children get older and acquire new interests in technology.

Noting that the majority of polled parents report that their kids use technology devices on car trips, Page says the coming summer season presents unique opportunities to engage kids.

If a long vacation drive is in store, parents may want to use the time to converse with their children. Such opportunities seem to be getting harder to come by in this busy world. It is important to take advantage of every chance to build strong communication skills.

Parents can learn more at http://identifythesigns.org/

What?s the Difference Between Auditory Processing and Listening Comprehension?

What?s the Difference Between Auditory Processing and Listening Comprehension?